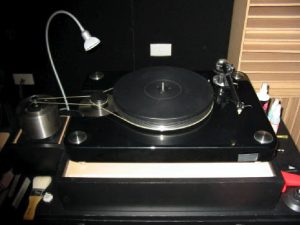 VPI ARIES 1 (ONLY)/JMW-10 or 12 TONEARM
I’ve owned and lived with an Aries 1/JMW-10.5 combination. They provide the best performance and value I know of at anywhere near their (now used) price points. The Aries will provide excellent performance in every sonic area, and it’s very easy to set-up since it has no suspension. It is more attractive than most of their other models and is also very well built. Because of the setup, I was not able to isolate the individual performance characteristics of the turntable and tonearm. Despite its overall excellence, it still lacks some of the refinement that the Class A turntables possess.

It’s worth the extra money (if you have it) to move up to the Aries from the HW-19. The only TNT model we feel is superior to the Aries, is the (now also used) TNT-6 “Hot-Rod”, with the really heavy platter. (Unfortunately, the “Hot-Rod” is rather rare, but worth purchasing at a good -50% off- discount.) How does the Aries compare to a Class A turntable/tonearm…?

VPI Aries 1/JMW 10.5 Vs. Forsell Air-Reference Turntable/Tonearm- Considering only the respective retail prices of these two front-ends, this comparison is obviously unfair, but the Forsell can be purchased used at a major discount, and the VPI is a modern design that has really impressed me. The question is: Can a “modern design”, the best that I’ve heard for the money, equal or even surpass the performance of an “all-out” design from a decade earlier?

When it comes to audio, I don’t like suspense. The Forsell is better, and it is easily noticeable. The Forsell has sonic advantages in every parameter except two. It is a little more natural, it has a larger and more focused soundstage, and, most importantly, it has a lower sound-floor, allowing the subtleties of the musical performance and the recording space to be more easily heard, felt and sensed. The VPI equals the Forsell in speed stability and it also has a slightly more solid, deeper and impactful bottom-end, though the bass on the Forsell appears to be a little more cohesive with the rest of the audio spectrum. (Note- With proper modifications, mainly extra air pumps, the Forsell’s bass equals or even exceeds the bass of the Aries.)

On a purely practical note; the Forsell requires the owner to upgrade its air supply and it also has problems with room isolation, while the Aries, and the JMW 10, are as easy to set-up and optimize as any serious turntable/tonearm I’ve experienced, and I’ve had many.

Both these particular Forsell and VPI models that were compared can still be improved. The Forsell by better air regulation and acoustical isolation, while the tonearm that comes with the VPI Aries has been updated. These various improvements do not alter my overall evaluation.

Further- I also prefer the Aries 1, overall, to the (standard) VPI HR-X (discussed below), which is twice the price. I’ve had both in my home. Still, the “Special Edition” HR-X, in Class A (above), is noticeably superior to the Aries.